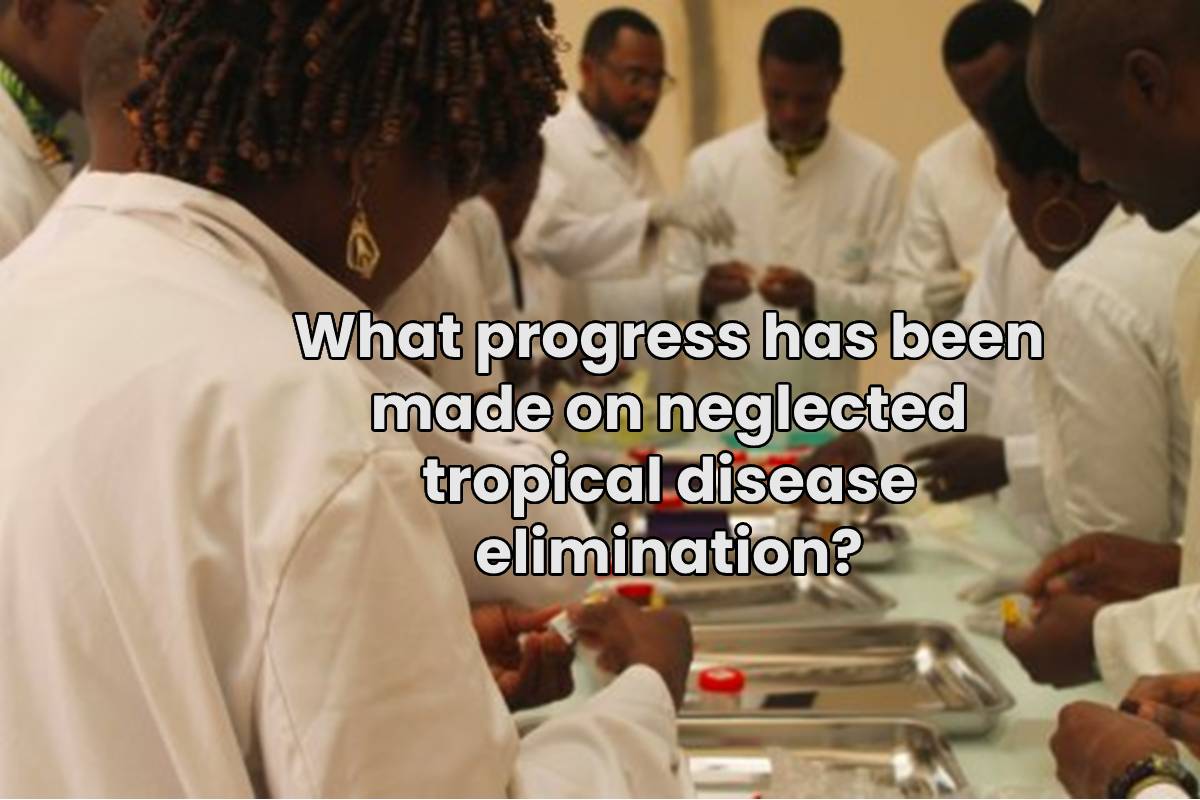 What progress has been made on neglected tropical disease elimination?

Estimates suggest that roughly 1 in 10 of the world’s population live in extreme poverty. Most of which are infected with one, or more, neglected tropical disease(s) (NTDs). NTDs continue to be a major threat to life for those in several African, Asian, Pacific and Latin American countries. In recent years, there have significant developments in treatments and strategies to tackle it and towards the elimination of neglected tropical diseases. But is it enough? Can we truly eliminate them?

In this blog, we’ll be exploring the history of neglected tropical diseases, outlining what progress has been towards eliminating them, the actions being taken by global disease institutions and the plans for the future.

A history of neglected tropical diseases

Neglected tropical diseases as a term was coined by Peter Hotez et al. to set clearer distinctions between NTDs and HIV/AIDS, tuberculosis and malaria.

Termed a ‘chronic pandemic’, they are a spectrum of bacterial, fungal, parasitic and viral infections prevalent in topical and sub-tropical regions – most common in areas where people have no access to clean water or safe, hygienic methods of disposing of human waste.

NTDs are sometimes defined as a ‘high burden’ of disease measured in disability-adjusted life years. For context, it is estimated that 26-48 million years have been lost to these diseases and that approximately one billion people are currently affected with 350,000-500,000 dying from them each year.

Obtaining precise figures is incredibly difficult as most diseases progress slowly. Also, symptoms can be insidious and are often not diagnosed until the later stages of disease progression. This is due to the fact that affected individuals typically don’t have the financial resources to access health care. Therefore, a large number of cases go completely unreported.

There are 20 diseases to battle in the elimination of neglected tropical disease:

What progress has been made?

Throughout the years, there have been increased, targeted efforts to administer care and treatment to the most heavily affected areas and communities of NTDs. These efforts can be catogorised as: preventive chemotherapy, vector control, veterinary public health, as well as improvements to water, sanitation and hygiene.

This is a disease control strategy used in communities and wider territories where NTDs are prominent, focusing on the effective and safe delivery of drugs for targeted groups. Preventive Chemotherapy has proven very effective in decreasing the harsh symptoms of disease; inhibiting permanent impairments and reducing chronic pain.

This has been used to combat NTDs such as onchocerciasis, lymphatic filariasis, dracunculiasis, schistosomiasis, soil-transmitted helminthiases, and trachoma.

A large number of NTDs are vector-borne. Effective vector egology involves implementing measures to target vectors that transmit pathogens that cause infectious diseases. Vectors include flies, ticks, bugs, and mosquitoes.

Measures to combat vectors include insecticide-treated nets as well as improved water, sanitation, and hygiene. There are increased developments to increase the quality, effectiveness, and availability of vector-reducing equipment for the billions of people that harmful pathogens can affect.

This approach aims to improve the health and hygiene of animals in environments prone to NTDs to better the health and well-being of people. Safer living environments for animals are a contributing factor in preventing the transmission of diseases from animals to humans.

Most vectors for NTDs inhabit environments with unsafe water and inadequate sanitation and hygiene practices. Notably, the safe storage of water, and the effective treatment of stagnant water, are critical factors in reducing exposure to disease-transmitting vectors.

The future seems optimistic for the elimination of NTDs – predominantly Lymphatic Filariasis, Onchocerciasis and Trachoma, with healthy progress being made in combating skin NTDs such as Scabies and Yaws. Resultingly, the numbers of new cases are at an all-time low in the history of neglected tropical diseases.

New treatments, such as fexinidazole – an oral treatment – are now approved for use and exciting technologies for diagnostics and monitoring and in development. Additionally, other worldwide factors that contribute to the prevalence of NTDs have reduced, too. Since 2000, the number of people living in extreme poverty has declined rapidly; less than 750 million people now live below the World Bank poverty level of $1.90 per day.

Most recently, future initiatives have been revised to ensure sustainable and effective plans are in play on a global scale. In 2020, the World Health Organisation (WHO) approved a roadmap for the elimination of NTDs in 2021-2030. However, COVID-19 had an unprecedented, devastating impact on the world and is, in itself, an NTD. COVID-19 has since had a major disruption on the programmes for mass drug administration and other wider NTD control measures.

In COVID-19’s wake, there is a serious risk that NTDs may resurface in areas where effective elimination had occurred before the pandemic. Now, the true success of controlling, eliminating, and moving towards the eventual eradication of neglected tropical diseases, will depend on us overcoming resource constraints to properly actualise the roadmap.

Zinc and Immune System Function: How to Boost Immunity with these Zinc Supplements